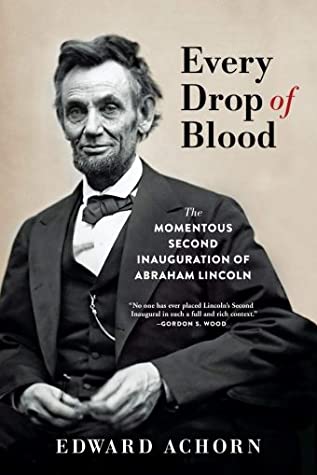 Every Drop of Blood is the latest creation penned by newspaper assistant, editor, and author Edward Achorn. Mr. Achorn has always been a tremendous admirer of Abraham Lincoln.  Lincoln’s two terms as president are of particular interest to him. Mr Achorn was inspired to write this by a friend who remarked about the presence of John Wilkes Booth at the second inauguration. This work of nonfiction has been a 5-year labor of love and no detail is omitted.

This book sets the stage starting with an eloquent and lengthy prologue. This brings the reader into the setting in Washington D.C. The story takes place during the lowest point of the Civil War campaign and Lincoln’s presidency.   We learn some previously untold information about the political climate in the capital. The book chronicles the day before Lincoln’s second inauguration, the day of the inauguration, and the day after. It also gives the reader some interesting background on John Wilkes Booth and his hatred of Lincoln.

I don’t want to reveal anything in the form of spoilers, though we all know how Lincoln’s second term was cut short by his assassination.  Instead, I will focus on the extensive research the author conducted in order to dig as deeply as possible into this period of history.  The bibliography resembles the reference pages of a Ph.D. thesis. Trust that the information given in these 297 pages is as accurate an account as possible.

I am not a historian, but this account had me totally engrossed. Achorn makes the people come alive on the page.  As an example, his descriptions of Walt Whitman’s visits to the hospitals, where he tried to bring some cheer to those suffering from extensive injuries from battle make the reader understand the war’s atrocities and the poor medical care available at the time.

I felt that I was right there, standing in the mud on Pennsylvania Avenue listening to Mr. Lincoln’s second inaugural address, and watching his swearing in ceremony. Achorn so vividly described the attire and complexion of the attendees, who ranged from the city’s richest socialites to the newly freed northern slaves.  I was surprised that in spite of Mr. Lincoln’s unpopularity, Pennsylvania Ave. was very crowded. So crowded that it was nearly impossible for his carriage to approach the steps of the Capitol. I wished in vain that someone in the security corps would have stopped Booth from slipping into the crowd, only to emerge a mere six weeks later at Ford’s Theater.  They had seen Booth in a VIP area, no less!

Edward Achorn has written two nonfiction books prior to this offering. They were very popular books based on important historical baseball players. The first book, Fifty-Nine in ‘84, is about Charles Radbourne of the Providence Greys baseball team long before MLB existed.  His second book, The Summer of Beer and Whiskey is about owner Chris von der Ahe and his building of the St. Louis Cardinals.

These would be must-reads for the sports fan!

While you’re here, why not check out out some of the other amazing content on this site. Have you heard about CRISPR?