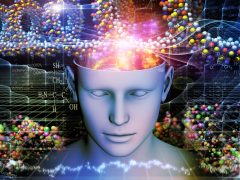 Abstract design made of human head and symbolic elements on the subject of human mind, consciousness, imagination, science and creativity

If you follow the world of biohacking in gene editing, you've undoubtedly heard of CRISPR and Kevin Esvelt. Kevin is an associate professor at MIT and runs the Sculpting Evolution program through MIT's Media Lab. Why is he important? He's the guy who discovered a way to edit life out of existence. Literally. "But why?!" you might be asking yourself. Well, to save humanity from itself, of course.

But let's take a step back and better understand what Kevin is working with. Maybe you've heard of CRISPR, a revolutionary gene editing tool discovered by Jennifer Doudna in 2012. It's been described as molecular scissors, essentially giving us the ability to "cut" a piece of DNA and replace it with a new piece. It's the cut and paste function a computer, but with the building blocks of life. This seems like a terrible idea, the kind of thing every sci-fi movie about anything has warned us about. But the ability to change ourselves, enhance the human body, enhance other animals... this isn't new. We do this currently through selective breeding in animals and cross breeding plants. What's different about CRISPR is that we can affect those changes immediately.

So what does that have to do with Kevin?

Esvelt discovered a way to make the CRISPR changes in an animal carry on to the next generation, ad infinitum, by discovering something called gene drive. It adds a "code" to the DNA cut that tells it to happen again, and again. Prior to his discovery, changes made by CRISPR couldn't be passed down generationally. Hypothetically you could tell a generation of mosquitoes, "okay, you're going to detest the smell of humans so much that you won't bite them ever again". They'd live there fraught little lives, infecting animals with malaria instead of humans. Then they'd breed, die, and their offspring would be ravenous for human blood again. Considering the lifespan of a mosquito isn't long, there wouldn't be much effect in reducing the threat of malaria. But then gene drive... suddenly you have a population of little buggers who despise humans that are breeding with buggers who love them. The encoded CRISPR overrides human love with human hate. Voila. Malaria stops spreading by its main vector and we've stopped one of the worst zoonotic infections.

This brings us to why Kevin can't die.

If Kevin Esvelt dies, his sense of ethics and all the Steves goes with him. So the real question is, who is working on downloading his brain?

Tags: science
Share This Post
Have your say!
00
Previous ArticleKaufman on the RunNext ArticleWhat is The Uncanny Valley MUD? How can I play?
4 Comments