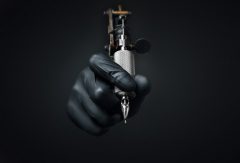 “Thanks bro, this looks amazing, I love it.  And the place looks great, by the way.”

“Yeah we just painted it and added some rooms.”

This conversation was happening as we strolled through the front lobby of a tattoo shop.  This is where a close friend had just completed phase one of an Andy Kaufman portrait on my right calf.  Since, I’ve nicknamed the piece “Andy Calf-man” (pause for laughter).

The fresh ink was mixing with blood and slowly creeping past the wet plastic wrap.    I’m quite a bleeder, so this didn’t surprise me. The blackness of Andy’s “Elvis” quaff wouldn’t leave me alone, it was ringing like a few hornets had just attacked, but that’s the game.  The needle had been deep in my skin just moments earlier, and I on my back, gritting my teeth for what I think is an underrated spot for tattoo agony.

I really hate the legs.

The pain wasn’t the only thing on my mind, however, and I adjusted my stance to alleviate some discomfort that began to arise in my intestines.  When my buddy saw me shift, he recognized a familiar move and instinctively kicked into “good host” mode.

“You need to christen the can?  The whole bathroom is brand new.”  He asked.

I thought about it for a minute and looked at that freshly finished bathroom, all shiny any clean.  But the bubbly sensation had settled and we were not that far from home, so I made a decision.

A decision I came to regret.

The winter air had a special kind of cold that night, as the Jeep raced along the empty highway.  The city buzzed by in a blur as we chatted and laughed about this and that.

Andy had subsided into a dull ache, and I’d nearly forgotten about Mr. Calf-man.

Then it hit me.

That feeling in the intestines.

That pang of panic.

And I knew I was about to see “wave two”.

See, wave one is the initial knock on the door.  Your body going “hey we got something brewing down here” so that you can start strategizing a spot to squat.

It’s when you deny that feeling it’s due diligence and push forward that you are introduced to the next phase.  This is a bit more intense, it’s more than a knock on the door. It becomes a heavy rap, that of someone who has knocked a few times and sees you in the window, so they’re trying to get you to respond.

And that’s where I was, sitting in a Jeep, cold winter wind blowing outside, very little suspension so we could feel every single bump in the road.  That Jeep was like a wild horse, barely domesticated on a long ride across dangerous territory. Little did we know there was a war party close by, just out of site, waiting to ambush.

Wave two struck me like I’d literally taken an arrow through the belly.  All at once, the sweat broke on my forehead (even though we could see our breath) and I began to straighten out like I’d been tied to some invisible stretcher.

My buddy went quiet as I clenched my teeth and closed my eyes, giving all of my focus to those desperate sphincter muscles, all the blood flow I could muster, every inch of strength.

Then it passed.  I relaxed my body back into normal seated position and began breathing again.

“Damn man, that was close.  If you do see somewhere with a bathroom do you mind pulling over?”

His confidence reassured me that everything was...

Wave three was not far behind, and when it came swinging through, on the heels of wave two, I was dumbfounded by the fierce power it had mustered.  It had returned briefly to its lair, grabbed some reinforcements, and came CHARGING back to the front line with its bayonet fixed.

I stiffened up like a board again, fully starched out, clenching and gritting, sweating and praying to every deity in the known canon to give me just an ounce more strength.  It was Thermopile all over again, my sphincter was King Leonidas screaming for the 300 Spartans to hold the line as Xerxes’ war elephants charged across the beach.

The Jeep swung into a parking lot of a small gas station off an exit ramp and after Wave three dissolved back into the unknown, I RAN into the store and quickly asked the foreign counter clerk if I could have the key to the John.

I almost didn’t believe him, and although his accent was not too thick, I pretended not to understand what he said and asked again for that magical key.

“NO PUBLIC RESTROOM!” He yelled, not really interested in politeness anymore, assuming I was a crazy person at this point, because I was sweating and holding my pants like a child.

The fast walk back to the Jeep was soul crushing.  My buddy saw the look in my eye and just pulled back out onto the road without a word.  He drove fast and with purpose, like an ambulance driver with a fresh patient in the back.

A loud grumble erupted from my lower regions and we looked at each other.

When you’ve successfully fought through three waves in a row and still haven’t found a bathroom, the darkness becomes incredibly vivid.  The Jeep no longer felt cold, because I was emitting heat from my skin. The sweat was dripping and I almost felt like I was in a dream. Had it not been for a brush against the seat with Andy Calf-Man to remind me of the pain, I might have written the whole thing off as a vivid nightmare.

But it WAS real.

And as we bounced along the desolate stretch of road, I was about to look fear directly in the pupil, in the form of an evil I have only seen a few times in my life.

Wave Four was upon me.  All was lost.

I assumed the position.  Straight legs, feet flat on the floor, shoulders lined up on the seat, and fists clenched by my sides.  My teeth clamped down and my eyes were lost behind locked eyelids.

“I don’t know how much longer I can hold on.”  I said in a panic as the wave subsided. It was like the scene in the movie when someone gets shot and they’re trying to get him to the hospital in time.  My buddy glanced at his rear view with great alarm, but it provided no help. He was trying not to look at me.

The Jeep pulled off the highway and we rounded the corner.  As we came down the hill, I saw the glorious lights of the convenience store and a ray of hope came cutting through the overcast sky.

Without asking, he cut across the lanes and bounced into the parking lot.  It couldn’t be any better timed, as Wave Five came charging at me from the darkest depths of my being.

“Run!”  He yelled after me as I bolted into the store.  As I opened the door and entered, I looked around in complete panic and yelled to the clerk that I needed the bathroom.

He didn’t understand my situation at all, otherwise he wouldn’t have used such a dismissive tone when he grumbled back at me.

The walls were spinning.  The lights were too bright.  The sweat was breaking. The inner chambers of my body cavity were preparing to empty.  My soul was waiting for the tunnel and the light.

I asked again, this time with much more intensity.  I wanted him to know that I wasn’t just some schmuck who wanted to take a piss.  This was do or die. This was revelation.

“Please can I use the bathroom?”

My voice cracked on every word.  I wiped my brow with the back of my hand and continued to search for the little hallway in the back that would inevitably lead to my salvation.

“FUUUUUUUUUUUUUUCK!”  I screamed into the air as my sphincter, oh brave warrior, oh King Leonidas, fell onto the battlefield, devoid of all strength.  The warm wetness hit my legs and I felt my pride shrivel and die as my pants filled with horror beneath me.

I had shit my pants in the middle of the store.

As I walked out of the store, I approached the Jeep using an unmistakable gait of a man with no room for full use of his legs.  I passed the Jeep and walked around the back of the place to the dumpster. I grabbed a cardboard box and flattened it, ripping off a chunk big enough to cover the passenger seat.

“You good?”  He asked as I opened the door.  Then he saw the cardboard come out to cover the seat and he covered his mouth.

I got in without speaking and sat on the cardboard.  I put down the window and allowed the cold to drown out the stink.  He laughed, and I couldn’t help but follow him, laughing at myself and the whole situation.

I’d lost the battle.  It was over. Now I was just a survivor of this terrible tragedy.

When we arrived at my house, I called my wife and asked her to have the front door open and to ask no questions.  I told her to go upstairs and to ignore anything she might see, hear...or smell. The dark of night covered me, but only for a moment.

As I crossed in front of the Jeep to head into the house, my buddy flashed the headlights and yelled out the window after beeping four or five times.

“Pat shit his pants!”  He yelled with glee and drove away howling in laughter.

I went in, cleaned up, threw my pants away, and took a shower.  Afterward, I put some ointment on Andy’s ever smiling mug and went to bed.

And though I wish to add a belt underneath Andy’s face that says “WWIGWC” (World Wide Intergender Wrestling Champion) I haven’t been able to shake the feeling that Mr. Calf-Man is cursed and will end the same way.

The moral of the story, if there’s one to be gleaned, is...

When someone offers you a clean, new white toilet, be the hero your story needs you to be and take that shit.